"Rule Number One: Never Lose Money. Rule Number Two: Never Forget Rule Number One". This general investment “rule” is attributed to Warren Buffet, whose over sixty-year track record of investment success is legendary. However, if you look at the investment portfolio of publicly traded stocks under Mr. Buffett’s control, they occasionally show capital losses from time to time. So, how should we think about this “rule”, as it could appear somewhat contradictory from perhaps the world’s most successful long-term investor? Well, the two qualifying factors that don’t fit as well into the quote are ‘time horizon’ and ‘portfolio management’.

Time Horizon –To prevent losses, you should consider the time horizon. If the capital is needed in the short term, the prudent investment approach would be to invest in cash and secure debt instruments, or short term guaranteed investments. However, if the capital is needed over a longer time horizon of 5, 10, 20 or more years, the same approach of cash and secure debt investments would almost certainly “lose money” if you take income taxes and inflation into consideration. To stay ahead of these increasing costs, and when the time horizon permits, prudent investing involves accepting some risk of loss. At BCV, we believe capital preservation is incredibly important to achieving long-term investing success. Our long-term approach and understanding of volatility and risk allows us to maintain a steady focus when current investment returns are strong, as we’ve seen over the last year, but also to not be overly worried when the world shuts down in a global pandemic as happened just eighteen months ago. The reason is based on focusing on the appropriate time horizon and employing strategies that can survive difficult times and thrive during favorable economic times.

Portfolio Management – The focus on the right time horizon and quality businesses trading at fair prices can still lead to violating the most important rule above, as the future is inherently uncertain. But this can also be managed, as one of the core principles of successful investing is diversification. Great companies don’t always remain great and can make critical business mistakes, which may become permanent losses. This can also happen with sectors of the economy, where profitability is significantly altered (Newspaper businesses over the last twenty years is a good example). While BCV believes in concentrated investing and owning high-quality companies, change is constant in the investment business, and good portfolio management can avoid permanent losses through prudent diversification and decision making.

This overall rule and these two concepts are good to remember as we enter what is likely a challenging time for capital markets. Governments have been spending aggressively to support the economy since the global pandemic shock and central banks have flooded capital markets with liquidity. This will not be maintained indefinitely, and capital markets will be affected as this liquidity is removed over time. It is likely that the two most influential central banks (The Federal Reserve of the United States and the European Central Bank) will begin to slow their stimulus, reducing liquidity in the system, and eventually raising interest rates. This occurred in 2013 and 2014 in the United States and it had a short-term negative impact on market valuations and volatility. If we see this occur again, we shouldn’t be surprised.

We remain committed to our philosophy of identifying investments with a low probability of permanent loss of capital and companies with limited downside yet a bright future with solid dividend income. We will not sacrifice capturing the dividend income and further growth in these businesses even though markets may be challenging in the future. Our focus on Rule Number One can be achieved with prudent diversification and managing portfolios based on an appropriate time horizon. While it requires patience, discipline, and fortitude; we learn from the past, watch the present closely, but remain focused on the future and investing in good long-term investments.

Since the onset of the global COVID-19 pandemic, interest rates have been held low due to stimulative monetary policy by the United States Federal Reserve. Given that substantial progress has been made in the United States towards the Federal Open Market Committee’s goal of price stability and full employment, the Federal Reserve has implied that the economy will need less stimulus in the coming months with the expectation that by mid-2022 or 2023, the Fed could raise its policy rate or overnight rate. Essentially, investors are betting that persistent inflation and better jobs data will lead to higher interest rates going forward.

Contrary to popular belief, we want to reiterate that higher interest rates or a reduction in monetary stimulus has not historically been associated with poor stock market returns. Interest rates rise as the economy improves and corporate earnings grow. According to research from BMO Capital Markets, in Toronto, the benchmark Standard & Poor’s/TSX Composite Index (S&PTSX) has historically exhibited double-digit returns during periods of rising interest rates. In New York, the Standard & Poor’s 500 Index (S&P500) has posted an average price return of 15% during periods of rising rates vs. 6.5% during periods of falling rates.

Banks generate approximately half of their revenues from net interest income, which is the difference between the interest income on longer-dated loans made to households and businesses and the interest paid on shorter-dated deposits to fund those loans. Bank profitability is measured by net interest margins, which expand as the yield curve steepens. The steepening of the yield curve refers to when longer term interest rates (like the 10-year) rise faster than shorter term fixed income rates (like the 2-year), which occur when the economy is expanding. Banks pay the lower interest on their deposits or liabilities and receive the higher interest on loans or assets, generating a spread called

the net interest margin. The combination of a steepening yield curve and stronger non-interest revenue through loan growth present tailwinds for the sector. Life insurance companies also benefit from rising interest rates. When insurance companies collect premiums from policy holders, they can reinvest in higher yielding securities generating higher investment earnings. Regardless of the interest rate environment, we continue to see excellent value in both bank and insurance stocks for our clients given reasonable valuations, strong balance sheets, and solid cash flow generation.

Rising rates also affect securities differently. When interest rates rise, value stocks tend to outperform growth stocks. As more companies in the market are growing earnings, investors are willing to pay less for that same level of growth, which causes the appeal of high growth stocks to fade relative to their value counterparts. Over the last few years, growth stocks have outperformed value stocks as shown in the chart below. While there are different factors at play driving the outperformance, many analysts attribute low interest rates as a primary factor 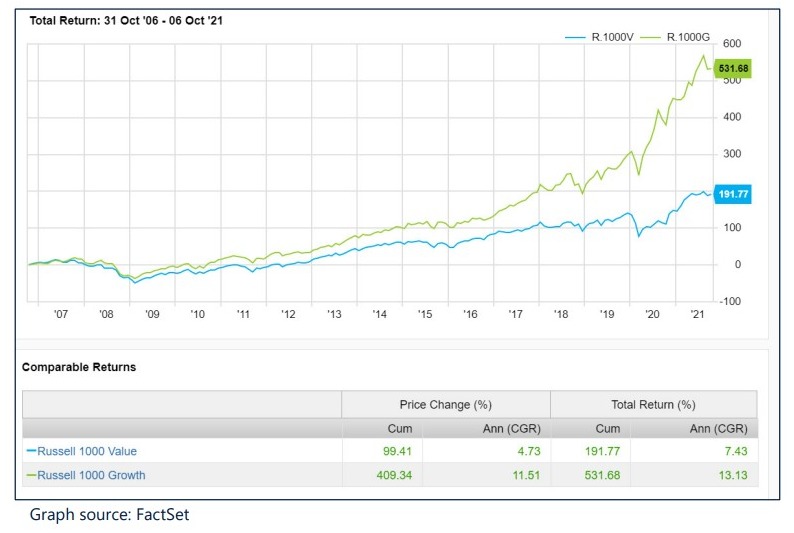 Higher rates also benefit sectors that are more cyclical or those whose earnings are tied to the global economy; specifically, financials (as discussed above), commodities, industrials, and consumer discretionary sectors. These sectors have also traditionally been classified as value sectors. Defensive or high yielding sectors such as utilities or staples are more vulnerable in a rising rate environment. While we are cognizant of these implications, we are first and foremost, a bottom-up research firm. We see value in owning a combination of both cyclical and defensive sectors through the different business cycles. We are confident in the companies in which we invest and their ability to maintain pricing power, pass on higher costs to customers, mitigate inflationary pressures, and grow earnings ahead of sector peers. Strong balance sheets will mitigate the challenges associated with a higher cost of borrowing. While uncertainty exists as the Federal Reserve dials back accommodation, we are confident that the companies we invest in will create value for shareholders over the longer term.

Notice to Readers: The Blue-Chip Report is prepared for general informational purposes only, without reference to the investment objectives, financial profile, or risk tolerance of any specific person or entity who may receive it. Investors should seek professional financial advice regarding the appropriateness of investing in any investment strategy or security and no financial decisions should be made on the basis of the information provided in this newsletter. Statements regarding future performance may not be realized and past performance is not a guarantee of future performance. This newsletter and its contents do not constitute a recommendation or solicitation to buy or sell securities of any kind. Investors should note that income, if any, from any investment strategy or security may fluctuate and that portfolio values may rise or fall. BCV Asset Management Inc. does not guarantee the accuracy or completeness of the information contained herein, nor does BCV Asset Management Inc. assume any liability for any loss that may result from the reliance by any person upon any such information or opinions. The information and opinions contained herein are subject to change without notice.