The Federal Reserve (the Fed) needs the cost of living to rise. The global economy is awash in government, personal and corporate debt. The Fed does not want to see or experience massive personal and corporate debt defaults; and growing the economy to reduce the debt burden has not worked since the United States housing crisis in 2008. Inflation, or an increase in the cost of living, remains the only remaining logical policy in their tool belts.

Global economies are experiencing rising government deficits; mostly due to higher future welfare liabilities becoming current, and partly due to the political class finding new reasons to spend money, including the Covid-19 pandemic. Underlying this profligacy has been unsustainable tax burdens on underperforming economies, with central banks left monetizing the debt by creating inflation. The effect of monetary inflation, even at two per cent, is to transfer wealth from savers, salary-earners, pensioners, individuals on fixed incomes and welfare beneficiaries to the government. In no way, other than perhaps from temporary distortions, does this benefit the population. It mostly benefits those that own real estate and equity portfolios. Not only does this transfer wealth from savers to governments, but also to borrowers by diminishing the value of capital over time. 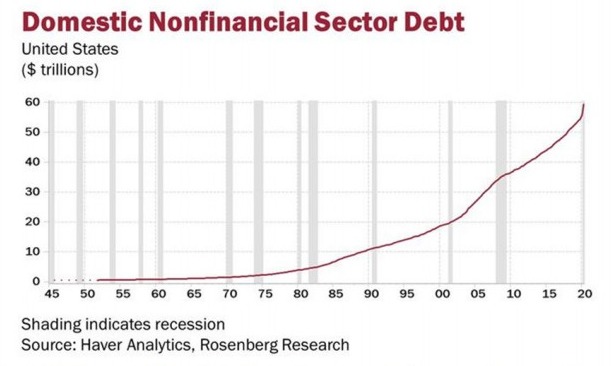 The Fed’s modified strategy of higher inflation is considered very dovish as interest rates are anticipated to stay lower for longer. This is called financial repression, as interest rates will be kept below the cost of living. Chairman Jay Powell of the Federal Reserve has set out a new target for average inflation at two percent. What the Fed is really saying is, if inflation increases above two percent, they may continue to let it run higher, for a longer period than what
would have been experienced in the past. Since 1960, inflation has averaged 3.2% (using the mathematically correct geometric average of the Fed’s preferred inflation measure). Today it remains stubbornly below two percent. The Fed’s new policy is simply saying that the central bank will be exceptionally dovish (low interest rates and quantitative easing, which is a fancy term that means lots of bond buying to manipulate the interest rate market) for a really long time.

The Fed’s dovishness is backed up by a shift in their perspective on the labor market, where a low unemployment rate will no longer prompt pre-emptive action to head off inflation. Investors have heard Mr. Powell and have responded appropriately. Long-dated bond yields (ie: long-term interest rates) jumped, as they usually do when interest rates are cut and inflation expectations rise, as the Fed is no longer expected to choke off an economic recovery in the near term.

It is easy to argue that all this is irrelevant. The Fed is stuck with interest rates near zero and has ruled out going negative and has been slow to set explicit bond yield targets, something more commonly known as yield-curve control. With its inflation measure at just one percent in September 2020, there is little need to worry about what will happen at two percent. But it does matter for the capital markets, and therefore for the global economy. Based on this, markets are expecting higher long-dated bond yields and higher stock prices. This is called the reflation trade.
The new policy means the Fed can more easily justify a higher inflation environment. The net beneficiaries of the inflation trade for equities are banks, life insurance companies, asset managers, real estate, pension funds, industrials, consumer discretionally, energy, precious metals, and basic materials. Laggards will be technology, bond like equities such as communication services and utilities, and consumer staples. Healthcare will continue to show growth on a secular basis due to an aging population.

As the Federal Reserve adjusts to an environment where interest rates are close to zero, and inflation takes center stage as a policy tool, BCV Asset Management continues to seek out suitable investments for clients. Our strategy of finding high-quality, dividend-paying companies will allow us to manage our portfolios appropriately, regardless of the economic circumstances or the Federal Reserve’s policy decisions.

Almost four years ago, we wrote about the U.S. Presidential election and the potential impacts a Clinton or a Trump presidency could have on client investment portfolios. While much has transpired across the globe since 2016, our message to investors remains the same; U.S. presidential politics have a minimal long-term impact on your investment portfolio. Rather than focusing on the outcome of the November election, take a step back and re-direct your focus on your investment goals and your commitment to your long-term investment plan.

Democracies create uncertainty. In modern times, as populist governments have gained power, this level of uncertainty has dramatically increased. Markets hate uncertainty. So, as we head into the final weeks of the Presidential race, significant market moves are neither irrational, nor unexpected. However, investors should be reminded that such volatility is only temporary. Ned Davis Research shows that stocks have risen more under Democratic presidents, with the Dow Jones Industrial Average posting an average gain of 7.8% a year, versus 3.3% under Republican presidents. Adjusted for inflation, the spread narrows to 3.8% and 1.1%, respectively. Regardless of which party holds the White House, the market’s trends typically are unaffected over the long-term. 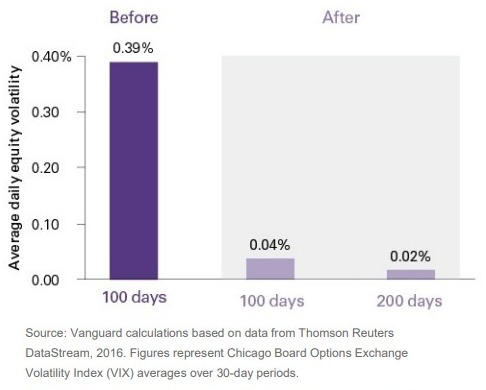 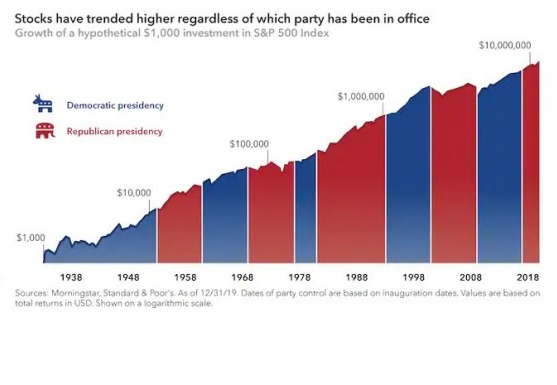 In 2020, the two parties could not be more different, nor could the void between them feel larger. The Republican and Democratic parties are running starkly contrasting campaigns, each appealing to their voter base. Platforms and promises from both are radical and far-reaching, much of which is unlikely to see the light of day. During the 2016 Presidential campaign, Donald Trump was threatening to tear up trade deals, making plans to build a wall, and imposing mass deportations from the United States. During his presidency, NAFTA was renegotiated (now the USMCA), a wall was never built, and deportations were limited.

Though the campaigns can seem extreme, exacting political change is near impossible without full Congressional support. Thus, investors should take comfort in knowing that control of the Senate is also at stake. Perhaps the most market-friendly result would be Biden becomes President, but the Senate remains Republican. The chaos Trump brings to the White House is removed, but the Democrat’s progressive agenda is tempered by the Republican Senate. Regardless of what transpires on November 3rd, any change to policy and campaign platform agendas will take time, allowing the market to price in and digest the information with an anticipation of minimizing volatility along the way.

At BCV, we follow a value investment philosophy in which we seek to maximize long-term returns while minimizing risk. We focus on the long-term investment horizon, investing client capital into the future. Remember, stocks generally rise over time regardless of who occupies the Oval office. As an investor, distance yourself from the news, the emotions, and the chaos, and remember that the fundamentals of the companies you own have not changed, nor has their ability for those companies to reward loyal investors with dividends. Most importantly, remember, whether Biden or Trump is elected, the President will only serve for a maximum of eight consecutive years. You; however, are investing for the rest of your life.

Notice to Readers: The Blue-Chip Report is prepared for general informational purposes only, without reference to the investment objectives, financial profile, or risk tolerance of any specific person or entity who may receive it. Investors should seek professional financial advice regarding the appropriateness of investing in any investment strategy or security and no financial decisions should be made on the basis of the information provided in this newsletter. Statements regarding future performance may not be realized and past performance is not a guarantee of future performance. This newsletter and its contents do not constitute a recommendation or solicitation to buy or sell securities of any kind. Investors should note that income, if any, from any investment strategy or security may fluctuate and that portfolio values may rise or fall. BCV Asset Management Inc. does not guarantee the accuracy or completeness of the information contained herein, nor does BCV Asset Management Inc. assume any liability for any loss that may result from the reliance by any person upon any such information or opinions. The information and opinions contained herein are subject to change without notice.