It is unfortunate that many investors focus too much of their time and emotions on short term fluctuations of security prices. Financial television channels like Business News Network in Canada and CNBC and Bloomberg TV in the United States ensure that investors can receive updated news and information around the clock. The news cycle is continuous, moving seamlessly from the North American markets to Asian markets in the evening, to European markets overnight, and finally to the start of North American trading the following morning. The internet allows investors to check quotes in real time, both at a desktop or on a mobile device. We think that one unfortunate consequence of the proliferation of news is that investors become distracted from the real issue of long-term investing in quality securities.

This focus is amplified by the fact that the global economy is moving in slow motion, particularly in North America, Europe and Japan. This new reality of slower economic growth may be with us for a while, constrained by high levels of government and consumer debt and the increasingly aging populations in these regions. The price of stocks ultimately depends on corporate profits and rising profits rely on positive economic growth. If we assume that slow economic growth is associated with slowly-rising stock prices, then investment returns that are based solely on a capital gain strategy will not perform very well. Many investors are too focused on price movement of stocks, particularly in the very short-term.

At BCV Asset Management, we focus on high-quality companies that have a history of regular dividend increases. We invest in a diversified portfolio of these companies and watch them very closely over a long period of time. Our expectation is that these companies reward investors through increasing dividends over time as well rising share prices, although we also understand that share prices will have some fluctuation over a shorter horizon.

The Royal Bank of Canada provides an example of the importance of investing for the long run. An investor who purchased shares on December 31st 2000 at $25.43 would have seen the value of these shares increase to $81.26 on September 30th 2016. The share price experienced two significant downturns, one in 2001 following the September 11th terrorist attacks and one in 2008 during the credit crisis, as well as the price volatility that is associated with any investment in the stock market. Royal Bank of Canada shares paid a dividend of 57 cents per share in 2000, providing a dividend yield of 2.24 percent at the time purchase. Over the past sixteen years, the dividend has increased and in 2016, the company pays a dividend of $3.24 per share. This long term investor is now earning a dividend yield on original cost of 12.74 percent. Over the sixteen year period, the investor would have received more back in dividends than was paid for the shares ($29.78 of dividends, $25.43 share price) as well as seeing the value of the shares more than triple from $25.43 to $81.26.) 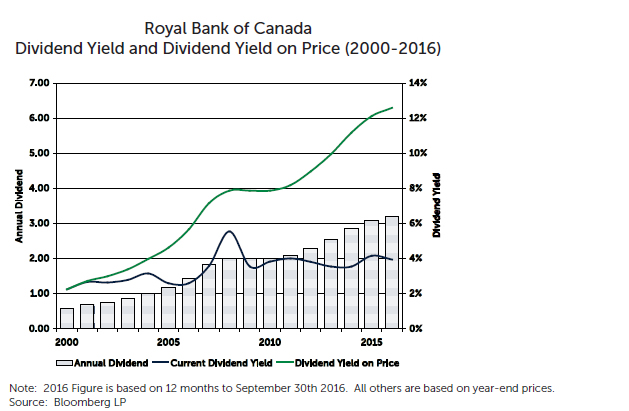 The Royal Bank of Canada example is a clear example of our investment philosophy- invest in quality, dividend-paying stocks that regularly increase their dividend, maintaining a longterm focus while watching these companies closely and carefully.

CIBC sold a negative-yield bond earlier this summer, marking it the first time that a Canadian bank has issued such bonds. Purchasers paid 100.054 for this bond, which will return 100.000 to investors in six years but will not pay any interest over the life of the bond, meaning that the bond was issued with a yield to maturity of -0.009 percent. As of August 2016, $13.4 trillion worth of bonds offer yields that guarantee that the investor will lose money.

The concept of negative interest rates cannot be explained without an explanation of the central bank. In very simple terms, chartered banks use the Bank of Canada (Canada’s central bank) for deposits, loans and transfers between the banks in a similar way that individuals and businesses use the chartered banks for their own banking needs. The Bank of Canada does not take individuals or businesses as customers.

The basic premise behind negative interest rates is that it now costs banks money to hold excess reserves at the central bank. These negative returns are an incentive to bankers to lend more money than they currently are, which should provide an economic stimulus. The extra money in the financial system should also help to push up inflation, as people bring plans for future economic activity from the future to the present. In addition, the low interest rates should weaken the country’s currency which in turn helps the country’s net exports by making exports more competitive in foreign markets and imports more expensive in the domestic market.

The theoretical benefits are not always achieved in practice. In early 2016, the Bank of Japan launched a negative interest rate regime. The Japanese yen actually strengthened and there was a large increase in the purchases of wall safes as people would rather put the money in a safe and make nothing over being charged to hold money at a bank. Sweden and Switzerland have also employed negative interest rates in 2016.

Here in Canada, the Bank of Canada has floated the idea that negative interest rates could be used should there be a need to stimulate the economy. Low interest rates for a short period of time should stimulate the economy, but negative interest rates would hurt the profitability of Canadian banks because they would have less appetite to create loans. Nouriel Roubini aptly describes the situation when he says that “if banks are driven to reduce lending to the private sector, monetary policy may become less effective, ineffective or even counterproductive.”

When central banks employ negative interest rates, the intent is to impact only the shortest-term rates. When longer-term rates also turn negative, the meaning is much different because these yields are determined in the fixed income markets. In early June, the yield on the 10 Year Federal Republic of Germany bonds (‘bunds’) became negative, reflecting concerns about the pace of economic growth and the potential impact of the then-upcoming Brexit vote on the euro zone, while also representing a flight to quality by investors seeking bonds of strong credit quality and liquidity.

With negative interest rates being tested and not always working as planned, it may be time to shift from using monetary policy (interest rates and currency) as the main technique for stimulating the economy to fiscal policy (government spending and tax rates). There has been a mounting voice of support for governments around the world to focus more on spending money on items that will put people back to work and create and renew muchneeded infrastructure assets. The Trudeau government ran on this exact economic platform and time will tell whether this is the correct approach.

Off to the Races – What the Presidential Election Means for Investors
Michelle Smith, B.Comm (Honours), CFA

In approximately one month, Americans will head to the polls to elect a new President. Voters will be asked to choose between Hillary Clinton, ‘Secretary of Status Quo’, and a political outsider, Donald Trump. As the world anxiously awaits the outcome of the presidential election on November 8th, the question of what a Clinton or Trump victory will mean for the stock market and for investment portfolios is top of mind for many investors. If history is any indication, presidential politics will have a minimal long-term impact on investment portfolios.

Democratic elections often create uncertainties, as this year’s presidential election has shown. Markets dislike uncertainty, so as we head into the final weeks of the campaign, investors should prepare to experience increased market volatility. However, investors should also be reminded that such volatility is only temporary. Historically, the Standard & Poor’s 500 Index has risen by 7.6 percent in the first year of a presidential term, irrespective of whether the President is a Democrat or a Republican. In fact, since 1926, a period that has seen eight Republican and seven Democratic Presidents, the Standard & Poor’s 500 Index has finished higher in more than two-thirds of all calendar years. Regardless of which party holds the White House, the market trend is typically unaffected over the long term.

The Democratic and Republican parties are running starkly different campaigns. Donald Trump is running a populist platform, threatening to tear up trade deals, making plans to build a wall on the Mexican border, and imposing mass deportations from the United States. In contrast, Hillary Clinton is promising to fight for equal pay, advocating for stronger gun controls, and promoting clean energy and healthcare reforms. Irrespective of who wins the race, it will not be business as usual at the White House. However, Presidents can do very little without congressional support. Investors should take comfort in knowing that control of both houses is also at stake. Current polls suggest that the Republicans will retain control of the House of Representatives and that it is likely that the Democrats will regain control of the Senate. Policymaking in the next presidential term will remain sluggish and adversarial, making it unlikely that much of the President’s platform will be implemented. Any changes to policy will take time, allowing the market to price in such changes and minimize volatility along the way.

At BCV Asset Management, we follow a value investment philosophy in which we seek to maximize long-term returns while minimizing risk. We focus on the long-term investment horizon, investing client assets for years into the future. Remember that stocks generally rise over time regardless of who the President is. As an investor, you should distance yourself from the news, the emotions, and the chaos, while remembering that the fundamentals of the companies that you own have not changed, nor has their ability to reward loyal investors with a dividend. Most importantly, remember irrespective of whether Clinton or Trump is elected, the President will only serve for a maximum of eight years. You, however, are investing for the rest of your life.