When Is The Best Time To Invest?
Tony Demarin, MBA, CFA, CIM, FCSI

This is by far the most common question that we receive from investors. These investors often want to know whether they should wait until the price volatility in the equity markets subsides.

Our answer is simply this- If one has an investment horizon greater than five years and can avoid the need to review equity market prices on a frequent basis, then the best time to invest is when one has the money to do so.

Volatility is a constant in the equity and fixed income markets. Day-to-day security price movements are mostly random and can vary significantly in the short run. Even the highest quality blue chip companies will sometimes experience a price decline without a logical reason. In fact, many of our best-performing investments have been held for years and most of these years were filled with significant price fluctuations.

Long-term investors who were able to block out all the noise were able to buy terrific companies at bargain prices in late January and early February. This only serves to reinforce the corollary that investors who cannot come to terms with the volatility of security prices should not be invested in the equity and fixed income markets.
We do not believe that volatility is helpful to investors who attempt to time the market. The opportunity appears tantalizing, but being uninvested for only a few days could cause an investor to miss out on a significant portion of returns. 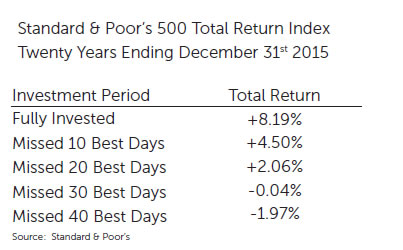 Long term investors with little current need for income from their investment portfolios can take advantage of market volatility by investing in high quality companies at reduced prices. If one is a net investor, with more income than expenses, then one should invest with that excess cash. There may be times that an investor overpays, but there is also times that an investor receives a bargain price. Over the long run, a portfolio should grow if one invests in high quality companies that increase their dividends at regular and frequent intervals.

We continue to uncover high quality investment ideas and are adding these to existing holdings in both Canada and the United States. We believe that a diversified portfolio of Canadian and American companies will outperform fixed income investments over the next five years. We find ourselves in the midst of an unusual fixed income environment, where bonds are trading at negative yields in many countries and, in countries where theyare not, they still provide negative returns after inflation is factored in.

On June 23rd, the United Kingdom (‘UK’) held a referendum on whether to remain a member of or exit the European Union (‘EU’). This was the first time that a country considered leaving the EU since  Greece was almost pushed out for much different reasons.

Financial markets were very focused on the UK vote, given the uncertain consequences of a Brexit, the colloquial name for the decision to leave the EU. The United Kingdom is the second or third largest economy in the EU, smaller than Germany and of a similar size to France, and the fifth or sixth largest economy in the world. The potential departure of the UK after forty-three years of membership in the EU could threaten the union’s long-term stability, given the populist anti-EU movements in other members of the union.

Leading up to the vote, the ‘remain’ camp was slightly ahead in many of the opinion polls and financial markets were largely expecting the outcome to be to remain. When the expected outcome did not happen, there was a large immediate reaction as traders reversed their positions. Currency markets reacted first, falling from 1.50 GBP/USD just as the polls were closing to 1.34 GBP/USD, just over a 10 percent decline, as the final result became clear six hours later. This sharp drop in the currency reflected fears of a weakened UK economy over the next few years. The equity markets also reacted swiftly, with the FTSE 100 Index falling by 5.7 percent in the first two days following the vote, and other European countries following this trend as well. Markets dislike uncertainty and this referendum to leave the EU has left investors with many questions about the future of the second-largest trading bloc in the world.

The biggest near-term issue that Brexit has created is the future of trade between the UK and the EU. Approximately half of the UK’s imports and exports are to members of the EU and any tariffs that might be levied on these goods and services would materially lower corporate profits and economic growth in the UK. The uncertainty about the future is expected to weaken corporate investments and consumer spending. The UK Treasury estimates that UK Gross Domestic Product will be 3.6 percent lower in two years relative to what it would have been had the UK remained in the EU. The UK does have currency flexibility, the pound has fallen, and it is likely that the Bank of England will lower interest rates in response to this economic slowdown.

Along with trade, a variety of other regulations need to be negotiated. Immigration was a key referendum issue as the EU provides for the free movement of labour within the union. There will have to be some agreement struck to deal with Britons working in the EU and non-Britons working in the UK. Immigration is a hot-button issue in other members of the union as well and the leaders of the EU are not likely to negotiate amicably as that could provide incentives for other members to follow the UK lead out of the EU. Other countries like Norway and Switzerland have close ties to the EU, but are not full members. The UK and EU will likely pattern trade agreements based on the ones with those two countries have with the EU. However, it is up to the UK to begin the negotiations to leave the EU, but politicians seem reluctant to move quickly. Interestingly, voters within Scotland and Northern Ireland chose to stay within the EU, which raises questions about the general stability of the UK if they leave the EU.

Canada and the United States have less than 5 percent of their trade with the UK, making the direct consequences to the North American economies quite low.
Capital markets desperately try to forecast and discount the future, however imprecisely. It is very difficult to forecast the long-term economic repercussions of economies. The UK referendum may trigger a slow unwinding of the EU or it may be something less significant, but the biggest consequences by far will be borne by the UK itself, when and if they implement this referendum.

To be a successful stock market investor, one needs to be able to manage the emotions that come with the inevitable fluctuations of the markets. Many of us remember the financial crisis of 2008 and 2009 and the challenge of witnessing a severe market downturn that was followed by a complete recovery by mid-2012. The market has recently experienced some pronounced volatility as a result of the United Kingdom’s decision to leave the European Union in the Brexit referendum vote. Following the vote, global financial markets were in turmoil. On the following day, the Standard & Poor’s 500 Index tumbled by 3.6 percent, with financial companies amongst the worst-hit stocks. This was the biggest setback in some ten months, with almost every company in the United States markets down on the day. In all, close to 2 trillion dollars of market capitalization was lost on the first trading day after the referendum.

As portfolio managers, we are confronted with stock market volatility on a daily basis. To start, it is very important to keep volatility in perspective. We are very aware that short-term movements in the market do not negate the fact that over the long term, good companies that consistently increase earnings and dividends have a strong likelihood of stock price appreciation. In fact, it is during times of market volatility that having a professional portfolio manager in place is most important.

It is also important to recognize that the willingness to endure volatility has tended to reward the disciplined, long-term investor. Often, the greatest reward immediately follows the most significant periods of market turmoil. Market rallies can happen quickly. In the rebounds from the last 15 bear markets (declines of 20 percent or more), the Standard & Poor’s 500 Index on average recouped nearly one-third of the bear market losses in less than two months. If you choose to sell equity holdings following a decline, you risk missing out on the potential for a powerful initial surge. Moreover, if you pull out of the market and happen to miss some of the best days, you may miss out on the recovery altogether.

To better understand how stocks have performed over longer time horizons, we can examine historical returns in the markets. While past performance cannot guarantee future results, the 10 year rate of return on the Standard & Poor’s 500 Index helps to provide perspective. Between the end of 1925 and 2015 and starting on December 31st of each year, there has been a total of 81 ten year periods- in 76 of those periods, the S&P 500 produced a gain and in the other 5 periods, a loss. In this context, only 6 percent of these periods produced a loss over a ten year horizon.

At BCV, we do not invest our client’s assets for today, this month, or even this year- but for years in the future. We see market setbacks as short-term events. Great companies that are consistently growing their earnings and dividends will increase in value over time, rewarding patient investors. Successful investing is about the future, not the past. In fact, we view times of volatility as potential opportunities. To quote Warren Buffett- we look for opportunities when others are fearful- because doing so positions our clients for the next market move upward.