It is safe to assume that interest rates will not rise in Canada for at least a while longer. The current level of economic activity, lack of consumer price inflation and slow labor market growth are all reasons to expect interest rates to remain unchanged. In fact, it may take until 2017 for the Bank of Canada to begin to increase its benchmark overnight interest rate. This is clearly not the case in the United States, as the Federal Reserve has done just that. It has just raised its overnight benchmark rate, the Fed Funds rate, for the first time since 2006. This signals that the economy and the labor are growing and healthy.

We are still living in a global economy with extremely low inflation and with technology disrupting almost every industry on the planet. The broader global economy is keeping labor markets weak and wage growth anemic, even though some countries are at more favorable points in the economic cycle than others. A tightening labor market and rising wages are necessary conditions for higher interest rates, which is why interest rates will likely stay low for a long period of time. 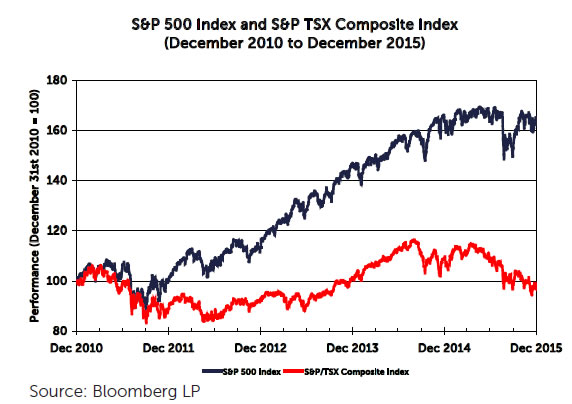 Over time, equity market returns tend to revert to their long-term average and we expect this to happen in 2016 because equity valuations remain low relative to their long-term average price to earnings multiple. The equity market in Canada is heavily weighted with financial companies, such as banks and insurers, and energy companies. The financial sector is showing great resilience, even against the backdrop of low-interest rates and a sluggish economy. Energy companies also seem likely to bottom in 2016 because they have simply fallen too far, even when the current price of oil and natural gas is taken into account. Positive performance in these two sectors alone will provide the foundation for the equity market in Canada to outperform once again.

Quite simply, we believe that investors have gotten too pessimistic on the Canadian economy and its equity markets. We believe that dividend growth is one of the best indicators of future stock price performance. In Canada, the largest eight banks have increased their dividends in the second half of 2015, three in the third quarter and five in the fourth quarter, reinforcing our opinion of their prospects in 2016. In the United States, third quarter dividends have eached all-time record levels, and globally, dividend growth remains strong as well.

2015 was a challenging year in the global financial markets. The rippling effect of lower energy prices and uncertain demand growth in China created a volatile market overall. The resulting commodity price weakness and the strength of the United States dollar combined to create destabilizing financial movements, culminating in December with the long-telegraphed move higher for overnight interest rates in the United States.

In the United States, the broad-based Standard & Poor’s 500 Index was down 0.73 percent over 2015. This was its poorest return since 2011, when the world was worried about Greece defaulting on its debt and about the weakness of the Euro region economies in general. The  United States market was also one of the most volatile since 2011, as the S&P 500 Index had intraday moves of over 1 percent on 72 trading days (or 28 percent of the 253 trading days in the year). The relatively flat returns also masked the broad weakness among companies to end the year. Of the members of the S&P 500 Index, 301 companies closed the year 10 percent below their high for 2015 and 175 companies in that group also closed the year 20 percent below their high. Some large companies helped to offset this general weakness, with the FANG stocks (Facebook Inc., Amazon.com Inc., Netflix Inc. and Alphabet Inc. (formerly Google Inc.)) advancing by over 35 percent in 2015. The worst-performing sector of the market was the energy sector, as crude oil prices found new lows late in 2015. The world continues to be oversupplied with crude oil, but with a narrow amount of excess capacity located solely in a volatile Middle East.

In Canada, things were a little bit worse, with the S&P/TSX Composite Index falling by 11 percent in 2015. The dropping price of crude oil had myriad effects on Canadian financial markets and the economy. The financial and energy sectors are the two largest constituents of the index, and both have been weak. While earnings have predictably plummeted for energy companies, those in the financial sector (which is dominated by the banks) have remained resilient. However, the price of bank stocks has been very weak as investors worry about high household debt levels broadly and potential for loan losses growing from Alberta.
The start of this year has seen a continuation of the weakness in the markets, along with high levels of volatility. It is impossible to say whether this year will be better or more troublesome than 2015, but in financial markets, uncertainty is one of the main constants amongst the many variables that affect prices. Volatility is uncomfortable, but normal, as investors and traders are always guessing or predicting future earnings and causing impacts to current stock prices. The market is the final and correct valuator of stocks in the long run, but its short-term track record leaves much to be desired. With the market conditions we are currently in the midst of, it is important to focus on the future and not on the volatility of the past or present. In the United States, the economy is growing slowly and along with corporate profits should allow stocks to continue their multi-year ascent, but rising interest rates may prove troubling this year. In Canada, where our economy faces more uncertainty, many companies seem inexpensive with solid dividend yields and growing earnings. It is a little bit reminiscent of the United States in 2009 and 2010, when companies were quite inexpensive, the economy was struggling and investor pessimism was rampant. Multi-year returns on the S&P 500 Index since that time have been exceptionally strong. While it may not turn out this way for the S&P/TSX Composite Index, we do see similarities like the struggling economy and investor pessimism. Combine this with inexpensive valuations, good business fundamentals and solid dividend yields and we see the necessary precursors to great returns for certain companies. Timing can be elusive, but the destination is very probable when quality, valuation and dividend yield are on your side.

How Low Can It Go?

The Christmas season is now behind us and for those of us who have purchased items in the United States, the January
credit card statement can definitely shock the system. If it feels like the Canadian dollar has had an unusually difficult year, it is because it has. Over the course of the year, the dollar fell some 16 percent from 0.8620 USD/CAD at the end of 2014 to 0.7225 USD/CAD at the end of 2015. This is the worst annual loss for the Canadian dollar in over four decades. 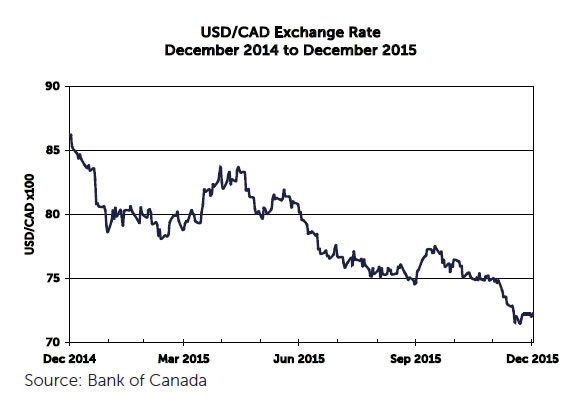 Basic economics suggests that as a currency weakens, export activity will increase and the currency value will stabilize. This was the working theory used by Bank of Canada Governor Stephen Poloz. Poloz, who joined the central bank from the Export Development Bank, saw the depreciating dollar as a means of facilitating increased exports to offset the impact of low crude oil prices. The problem with this theory is that an economy the size of Canada cannot turn on a dime and that factories cannot be opened that quickly. During the recession of 2008, which was a time that the Canadian dollar was trading above par with the United States dollar, a lot of the manufacturing capacity and employment was redirected to other, lower cost countries. 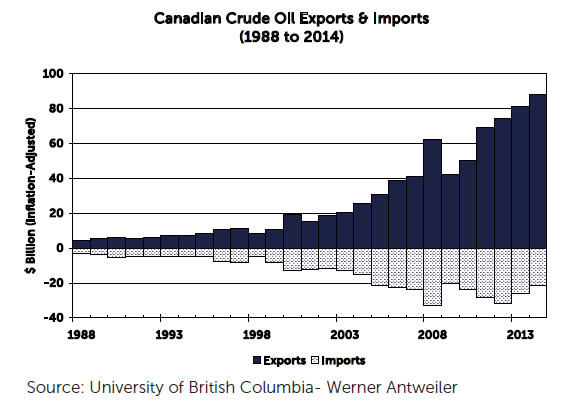 Canada’s steadily-increasing economic dependence on oil and minerals has amplified the correlation between crude oil prices and the Canadian dollar. A study by Werner Antweiler of the University of BritishColumbia has concluded that a 10 percent increase in the price of a barrel of West
Texas Intermediate Crude Oil would lead to a 3 percent increase in the CAD/USD exchange rate. (The reverse is also true for falling crude oil prices.) While there are other factors that can affect the currency, the crude oil price has had a progressively larger impact on the Canadian dollar as the amount of oil that is produced in Canada has increased steadily over the past decade.

Where do we see the Canadian dollar going from here? The price of crude oil continues to test the phrase ‘lower for longer’ and is unlikely to return to the 100 dollar plus prices seen in 2008 any time soon, absent a significant geopolitical event. A normalizing price between 45 and 55 dollars per barrel in 2016 is more than possible, as the demand for oil increases and overtakes the supply glut that is currently overhanging the market. As the broader Canadian economy starts to turn around and the price of crude oil stabilizes or even possibly starts to rise, the Canadian dollar should also begin to strengthen. All six of the large Canadian banks expect a modest recovery for the Canadian dollar in 2016, albeit at a slow pace. We share that outlook.

An Investment Policy Statement (‘IPS’) is a document that investors use to provide direction to their Portfolio Manager.

The IPS allows investors to define a target asset allocation, which reflects their investment objectives and risk tolerance. It also allows them to communicate other parameters such as income requirements, capital requirements, taxation issues and other special circumstances that they believe are important for the Portfolio Manager to understand. The IPS also allows investors to update information such as their annual income, investment knowledge or value of their assets being managed that has changed since the last update.

All clients of BCV Asset Management have signed an IPS when they first started investing through us. The IPS is a document that should be updated on an annual basis.

Please contact one of the Portfolio Managers at BCV if you wish to discuss the details of your IPS.